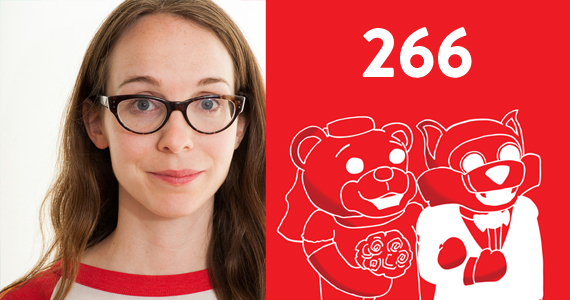 Also, here is Kerri’s delightful Etsy store, if you would like to peruse it.

Opener: “Blue Eyes” by Ladyhawke, from the album Anxiety
“Everything is Embarassing” by Sky Ferreira, from the Ghost EP
Closer: “Hawk Highway” by Cymbals Eat Guitars, from the album Strychnine Dandelions

Episode 166: Super awesome show with super awesome guests Dan Telfer and Kerri Lendo! Some comedy talk, in your face dinosaur talk, Friday Night Lights, the Ladies Are Funny Festival, and David finds out something shocking from his birth certificate.

Opener: “Windstorm” by The School of Seven Bells, from the album Disconnect from Desire
“Lions and Cages” by Wolf Gang, from their self-titled album
“Drowning” by The Reigning Sound, from the album Too Much Guitar
Closer: “Glitter” by No Age, from the album Everything In Between

The super funny comedienne, award-winning filmmaker, and friend of the show KERRI LENDO will be joining us in-studio tomorrow. If you’re next to a radio (91.7 FM) or a computer (koop.org) tomorrow and don’t tune in (6-7 CST), you’ll have only your cold empty heart to console you. And, knowing you, probably whatever’s on Netflix instant.

Check out a short film of hers after the jump.
END_OF_DOCUMENT_TOKEN_TO_BE_REPLACED

Episode 123: Mac is on assignment, but David is joined in-studio by comedian and creative force KERRI LENDO to talk about her new project, a stage adaptation of the Magnetic Fields’ 69 Love Songs. Movie talk and David wrings his hands about music festival line-ups.