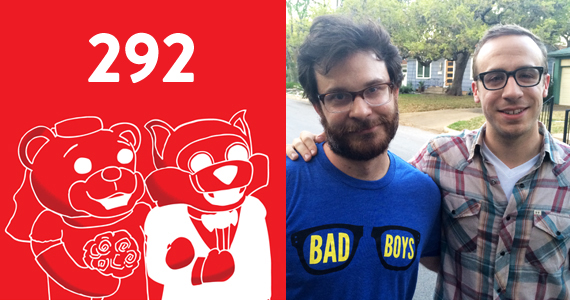 Episode 292: From the comedy group Bad Boys, Byron Brown and Sam Malcolm join us in studio for a packed show. How packed? We have a Mascot Wedding Vision Quest, a scene from the movie Vision Quest, some strip club talk, 9/11’s affect on relationships, and more. Plus, stay tuned till the end for a very big announcement.

The MWS kicks off our 2014 offerings with an extrasode – another Mascot Wedding Gold Lion. This best-of nugget features Rikembe Mutombo, brother of the then recently retired NBA great Dikembe Mutombo. This gem came from a 2009 MWS broadcast. Next week, we’ll be back with a brand new episode featuring John Merriman.

Episode 164: Your radio lions killed it this week. Mac and David talk about the Texas Relays, U2, awkward customer service, dog psychics, and more. Plus, Craig Bettencourt calls in to talk about a mayoral initiative.

Episode 94: After nine weeks of solo shows and membership drive episodes, everyone’s back! David! Mac! DJ apprentice Hupp! Together again! The callers decide to help the boys celebrate by being more off the mark than ever. That stupid balloon boy hoax inspires the magic boys to tell tales of trying to trick their parents, Craig Bettencourt calls in to collect on a bet, the Final Score, and more.

Opener: “Hideaway” by Karen O & the kids, off the Where the Wild Things Are soundtrack
“Long White Desert Rose” by Spiderbags, off the album Goodbye Cruel World, Hello Crueler World
“Know Better Learn Faster” by Thao with the Get Down Stay Down, off the album Know Better Learn Faster
“My Body’s a Zombie for You” by Dead Man’s Bones, off their self-titled album
Closer: “Didn’t Tell You a Lie” by the Carbonas, off their self-titled album

Opener: “1901” by Phoenix, off the album Wolfgang Amadeus Phoenix
“Civilization’s Dying” by the Zero Boys, off the album Vicious Circle
“East of Hercules” by UME, off the Sunshower EP
“Something More” by Kelly Stoltz, off the album Circular Sounds
Closer: “Far Far Away” by Slade, off the collection Get Yer Boots On

Episode 68: David returns! The magic boys recount their trip to see the Spurs vs the Rockets. Radio Shack gets bemoaned. A call from the brother of a famous basketball player.

Opener: “Hello Tomorrow” by Karen O. and Squeak E. Clean
“You Mean Nothing to Me” by Jay Reatard, off the Matador Singles ’08 collection
“Turn it on” by Franz Ferdinand, off the album Tonight
Closer: “Waking Up Drunk” by Spiderbags, off the album A Celebration of Hunger