Episode 299: Our second to last episode, recorded live at the the friendly confines of ColdTowne Theater. Joe Hafkey joins on stage, plus visits from a sick child, a super fan, the show’s mailman, and even David from the future. Super fun show!

Thanks to: Everyone who came out! Dustin Svehlak for recording it. Ryan Darbonne for working the tech booth. Cody Dearing for the use of the theater. Kath Barbadoro for the photo. Special guests Ximena Estrada, Lance Gilstrap, Michael Jastroch, Carlos LaRotta, and Aaron Brooks (seen below).

It’s another Mascot Wedding Gold Lion, a short, best-of nugget from a past show. On this EXTRAsode, we have a call from Eugene Fernwell, author of There is Time for Love, Doctor Jones: Eliminating Distractions and Focusing on What’s Important along with a special guest host Ximena Estrada. The MWS proper will be back next week with an episode featuring Erin Foley. Enjoy! 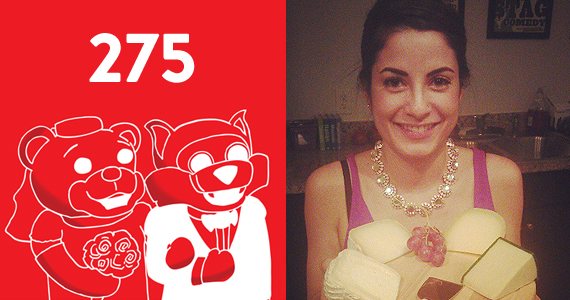 Episode 275: Ximena Estrada (STAG Comedy, Precious Dads) is our guest, David falls asleep mid-sentence, the debut of “Night Boners”, plus a woman joins us to talk about her experience on Bar Rescue.

Opener: “Recover” by CHVRCHES, from the Recover EP
“Bohemian Rhapsody” by The Braids, from the album Here We Come
Closer: “Favorite Place” by Black Books, from the Aquarena. EP

Episode 188: David Jara is on assignment, so Mac is joined in studio by comedians Ximena Estrada and Michael Pedicano. This show has it all, folks. Chiropractics talk, Mac hanging up on a caller twice, Facebook, Steve Jobs, dead animals, and more.

Opener: “Soma” by Frankie Rose, from the compilation Stereogum Presents… STROKED: A Tribute To Is This It
“Weekend” by The Smith Westerns, from the album Dye It Blonde
Closer: “Wooden Bones” by Follow That Bird, from the Wooden Bones 7″

Episode 154: David returns as does special guest Ximena Estrada. The Remake a Movie Game finally gets off the ground. Mac tries not to say “UH” and fails + more.

Opener: “Pursuit of Happiness (Kid Cudi cover)” by Lissie
“Funerals” by Jason Lowenstein, from the album At Sixes and Sevens
“Ill love” by Pete & The Pirates, from the album Little Death
Closer: “On Land” by TV Girl, from their self-titled EP

Episode 153: David Jara is on assignment, so Mac is joined in-studio by Ximena Estrada. Some Golden Globes talk, comic strip deaths, a call from a man excited about a circus, the remake a movie game false-starts, and Mac gets guilted into giving away tickets to 30 Seconds to Mars. When we planned out this show we weren’t aiming for mean-spirited, but…

Opener: “Pursuit of Happiness (Nightmare)” by Kid Cudi, MGMT & Ratatat, from the album Man on the Moon: The End of the Day
“If You Want It” by TV Girl, from their self-titled EP
“Wide eyes” by Local Natives, from the album Gorilla Manor
Closer: “Louder Than Ever” by Cold War Kids, from the album Mine is Yours

Episode 053: David Jara is on assignment, so special guest host Ximena rejoins Mac on air. Mac gets initimidated by his postman. Some talk about falling asleep on the couch, movies set in the future, and Christmas shopping. Plus, a round of “You know what? I like this” leads to some Family Guy talk (don’t tell David). Full show.

Episode 049: David Jara is on assignment, so Mac is joined in-studio by special guest (Mascot Wedding Productions’ own) Ximena Estrada! Author Eugene Fernwell calls in. Mac bears the burden of being a rock DJ. Ximena is weary of danciness. Plus, some dumb callers, Beck talk, and more McRib talk that necessary.